Barney Graham, the architect of Moderna and Pfizer vaccine, is honored in a Washington, D.C. celebration. 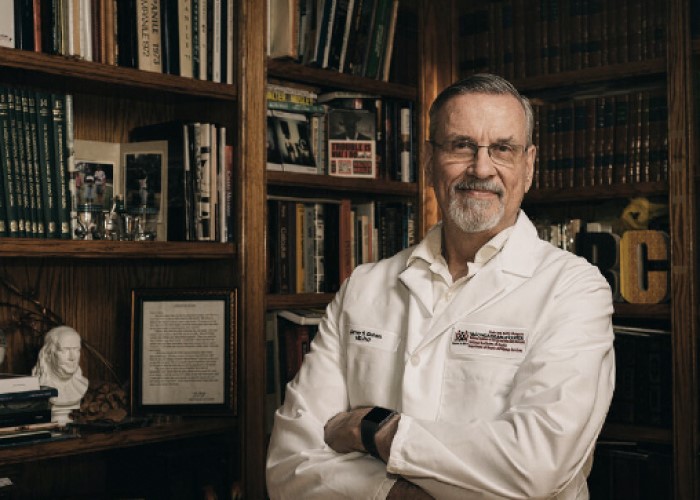 Barney Graham, M.D., Ph.D., is a 1979 graduate of the University of Kansas School of Medicine. He was named 2021 federal employee of the year for his work in providing the structural elements of the COVID-19 vaccine

Barney Graham, M.D., Ph.D., a 1979 graduate of the University of Kansas School of Medicine, has been named 2021 Federal Employee of the Year based on his research that led to the development of a COVID-19 vaccine.

Last year’s medal winner was Anthony Fauci, M.D., director of the National Institute of Allergy and Infectious diseases for his work in leading the country through the COVID-19 pandemic. Of this year’s co-winners, Corbett and Graham, Fauci said, “Their names will be in the history books. All the (COVID-19) vaccines that are doing really well are totally dependent on their work.”

Graham and Corbett built on Graham’s prior research of virus spike proteins in MERS and respiratory syncytial virus (RSV) to find ways to defeat the novel coronavirus. Leveraging an existing relationship with Moderna, the two scientists brought a modified spike protein to the biotech startup’s messenger-RNA platform and began developing plans for a vaccine. Days later, Graham and Corbett supplied the crucial information for a vaccine. Just 65 days after that, doses were manufactured for human clinical trials.

John Mascola, M.D., director of the VRC, called the vaccine “the cumulation of Barney’s life’s work and a validation of his vision of pandemic preparedness.”

Graham grew up in Kansas and graduated from Paola High School. After obtaining his bachelor’s degree in biology at Rice University in Houston, Texas, Graham returned to Kansas for his medical degree, which he completed at KU in 1979.

The KU Medical Center Alumni Association named Graham a Distinguished Medical Alumnus in 2017, and in 2021, the KU School of Medicine conferred upon him an honorary degree during its recognition and hooding ceremony.

At the ceremony, Robert Simari, M.D., executive vice chancellor for KU Medical Center, said, “The work done by Dr. Graham and his colleagues at the NIH Vaccine Research Center are really responsible for the rapid development of the COVID-19 vaccines and in particular, the Pfizer and Moderna vaccines. His career certainly points out the value of Jayhawk education but also the potential of federally funded research on our society.”

The Partnership for Public Service presents the Samuel J. Heyman Service to America Medal annually to federal workers whose achievements have directly benefitted the health, safety and prosperity of the United States. The awards ceremony, nicknamed the “Sammies” because it’s considered the “Oscars” of government service, was held Oct. 28 at the John F. Kennedy Center for the Performing Arts in Washington, D.C.

We use cookies to analyze our traffic & provide social media features. Visit the KU Medical Center Privacy Statement for more information. By closing this window & browsing this site, you agree to our use of cookies.