New position combines formative memories and personal research on mobility issues to benefit students and faculty within the School of Health Professions. 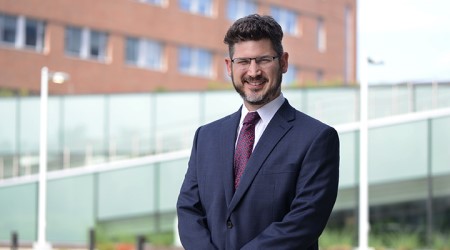 Jacob Sosnoff, Ph.D., is the new associate dean for research for the KU School of Health Professions. One of his research areas involves the prevention of falling, especially in the eldery where falls can create physical and emotional setbacks as well as injuries.

Decades ago when Jacob Sosnoff was a boy in his grandfather's shop, he witnessed how an artificial limb or set of braces brought mobility back to individuals who had mobility impairments. Those formative memories led him to a career in rehabilitation, a passion for mobility research and, ultimately, his new position as associate dean for research at the University of Kansas School of Health Professions.

Sosnoff, Ph.D., who also carries the title of professor in the Department of Physical Therapy, Rehabilitation Science and Athletic Training, said the family business emerged from his grandfather's engineering skills. "A doctor friend said to him, ‘Fred, I need some braces made. Can you do that?' My grandfather realized he had an aptitude for it and started a company building braces and artificial legs," Sosnoff said.

"My childhood was filled with station wagons full of prosthetics and braces. I spent plenty a weekend growing up delivering prosthetics and braces to area hospitals. My brothers and I use to race around the 'shop' in wheelchairs waiting for my dad to finish a project. So, I've been exposed to mobility impairment from birth, essentially," he said.

He said his most recent move from the University of Illinois at Urbana-Champaign was because he wanted a leadership role in the research process.

"My goal professionally - and it might sound corny - is to make the world a better place," Sosnoff said. "I realized as an individual researcher - although I was doing good work - that work was going to have a limited impact. So, the way I can have a more positive impact is by helping other people do really good research," Sosnoff said.

He said his job is to reduce barriers for School of Health Professions researchers. "We have really gifted people on campus, and I'm going to do my best to give them the resources they need and then stay out of their way. Ultimately, I really want to make sure the work we're doing is impactful and improving health."

Abiodun Akinwuntan, Ph.D., MPH, MBA, dean of the KU School of Health Professions, said Sosnoff has already impressed him in the few months the new associate dean has been on campus. "Dr. Sosnoff understands that while individual efforts can go so far, collective efforts go much farther in ensuring research success in an institution such as KU Medical Center," Akinwuntan said.

According to Akinwuntan, Sosnoff since February has:

Hannes Devos, Ph.D., associate professor in the Department of Physical Therapy, Rehabilitation Science and Athletic Training at KU Medical Center, said he isn't surprised by Sosnoff's laundry list of early accomplishments. The two worked together as primary investigators of a study to evaluate the effect of training on a virtual reality treadmill for those with multiple sclerosis while Sosnoff was still at the University of Illinois.

"When he told me he was offered the position, I told him that KU Medical Center is lucky to have him," Devos said. "He brings a new energy to the School that is truly electrifying."

Studying falls and other mobility issues

Sosnoff's own research centers on mobility issues, particularly in patients with multiple sclerosis and in the elderly. One of his current research projects was sparked by a conversation with a retiree back in Illinois. "I was giving a talk on falls prevention, and I ask how many people fell and got hurt. This older gentleman raised his hand and said, ‘Son, I fall three or four times a year but I never get hurt.'"

Sosnoff was intrigued. "I asked him, ‘So what's your magic?' and he said, ‘I had the privilege of jumping out of an airplane when I was 19 years old for the U.S. Army. I was in the Korean conflict, and the Army taught me how to fall. I'm 76 now, and I can still fall.'"

The researcher realized he could conduct a study of elderly paratroopers, or he could see if teaching someone to fall could help that person avoid injury when falling accidentally. He chose the latter, and this summer anticipates beginning a study that focuses on teaching people to fall safely.

"Falling is one of those problems that is very important and we haven't found a great solution - at least not yet," Sosnoff said. "I like to be able to innovate - to take a risk - and understand how to prevent that problem. Think of Humpty Dumpty: I don't want to put him back together, I want to stop him from breaking apart in the first place."

We use cookies to analyze our traffic & provide social media features. Visit the KU Medical Center Privacy Statement for more information. By closing this window & browsing this site, you agree to our use of cookies.